Note: SPOILER WARNING!!! This review on Nausicaä of the Valley of the Wind will contain spoilers. If you have not seen the movie yet and you do not want to be spoiled, Leave now. If you have seen the movie, Enjoy my review. Finally, If you don’t care about spoilers, Once again, enjoy the review. You have been warned.

The review on the 4th movie of Studio Ghilbil fest is here and it’s Nausicaä of the Valley of the Wind, a movie based on a post apocalyptic world. Kinda like Mad Max but more kid friendly and it went a different approach. Instead of zombies or robots destroying most of humanity, it was giant bugs. Now was the movie good? I’ll let my review answer that for you.

Like I have said, the movie takes place in a post apocalyptic world which was caused by a war between humans and giant insects one thousand years ago, resulting in the destruction of civilization and the creation of poisonous forests where the giant insects live. Nausicaä is a princess from the Valley of the Wind (Hence the name of the movie) and she tries to find a way to communicate with the insects to understand them and bring peace in order for humans and insects to co-exist. There’s even a prophecy mentioned from a lady in the valley of the wind that said that someone with blue robes walking in a golden field will guide the people to the pure lands. I’m not going to say if that prophecy gets fulfilled in the movie or not, but I will say that the story is great just like the other Ghilbli movies.

First off, the movie got some really good voice actors. Actors like Patrick Stewart, Shia LaBeouf (Before he went bat shit crazy), Uma Thurman , and Mark Hamill. They all fit their characters perfectly and it didn’t feel out of place. The action and fight scenes are great, the music is beautiful and fits in the moments of every scene. I love the part where the Giant Warrior (Bio Weapon used to fight the Ohms) use it’s beams to kill off some of the Ohms(Giant Insects) even though it died since it was hatched prematurely. I also liked how Nausicaä always get the ohms to be calm and understand their situation especially the part where she was in the middle of ohms territory in the water when the plane she was on crashed when she was being rescued by Princess Kushana and her army. Finally, I liked how she was able to fight some of the soldiers and stand her ground till she was stopped by Lord Yupa before she almost got herself killed. The only problem that I have about the movie is that I wished I would have seen the Giant Warrior fully matured and see how powerful it truly is. I want to know how much it can fuck shit up against the ohms but other then that I have no other problems against the movie. Come on, look how awesome it is:

I give this movie a 5 out of 5. If you are into post apocalyptic world movies regardless if its kid friendly, this will be a good choice for you. Great story, great cast, and good music. What more can you ask for? Tell me what is your favorite part from the movie and do you agree or disagree that it would have been awesome to see the Giant Warrior fully matured and why? 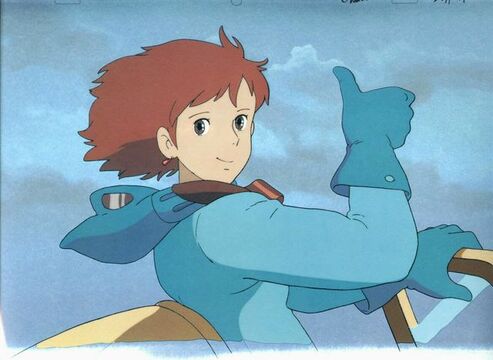